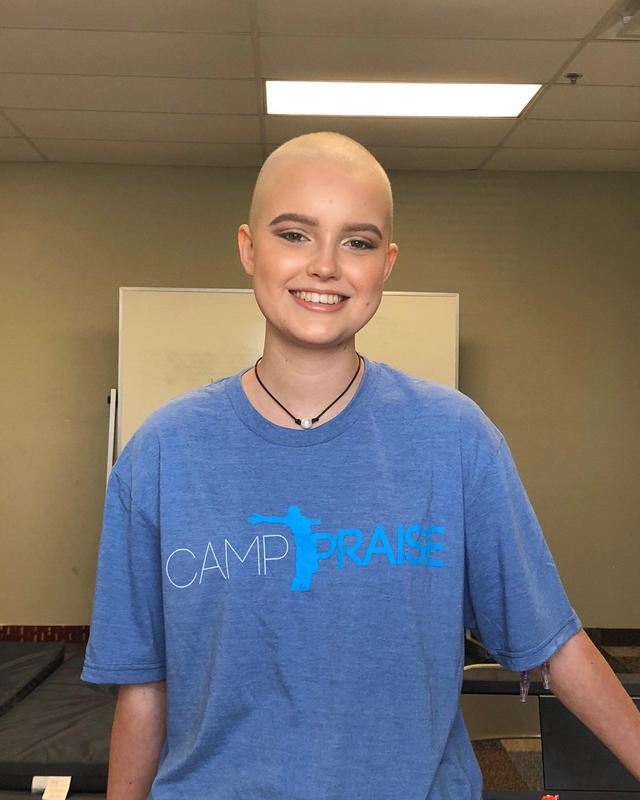 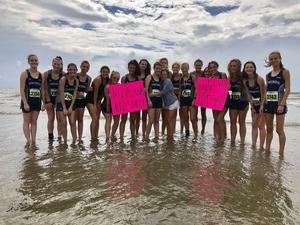 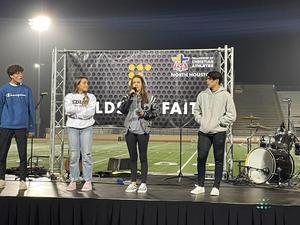 Concordia senior, Kylie Good, recently was featured in PR Luxury Media’s Review It Magazine’s January 2022 edition for a memorable experience she was given through the Make-A-Wish Foundation. Specifically, she was the cover story for Review It Magazine’s Lake Conroe and Montgomery editions.

As part of the Make-A-Wish experience, Kylie was able to do things that high school girls dream of: shopping spree, makeover, and modeling photoshoot. The full article from Review It Magazine is printed below.

Good was diagnosed with lymphoma while in 8th grade at Trinity Klein Lutheran School in 2018. Going into 8th grade, she was a very active volleyball player for the Eagles and competed outside of school through club volleyball. In addition to athletics, Good has many talents, including a God-given talent for singing.

After the completion of six rounds of chemotherapy treatments while trying to finish 8th grade and over the summer, the path for high school athletics changed for Good. Instead of volleyball, Kylie joined the Concordia Girls Cross Country program following being released for athletic participation on August 1st of her freshmen year (2018), just eight months after initial diagnosis.

Needing some weeks to build up her stamina, Good’s first race came in the middle of the season, along the beach in Galveston. During the JV race, many varsity runners held signs of encouragement to help Kylie finish her first ever high school race. The team became supportive sisters for Good who was trying a new sport. Fast forward to this year, Good has been part of the Lady Crusaders Cross Country team for all four seasons during high school.

In addition to cross country, Kylie has been an extremely active Concordia student being involved in many extra-curriculars, something we encourage all our students to do.

Good has been a talented singer for many years dating back to middle school when she would sing in chapel at Trinity. Her love for music continued in her time at Concordia, where she sang in the Treble, Concert, and Chamber choirs, as well as helped lead worship at chapel. Good was also selected following a national audition process to the National Lutheran Honor Choir as part of Concordia University, Nebraska’s Musical Arts Day her sophomore and senior years in 2019 and 2021. (Due to the COVID-19 pandemic, Musical Arts Day did not occur in 2020.) Outside of Concordia, Good spent a summer at a praise and worship retreat/camp.

Kylie has also been a member of Student Council and the track team, and is currently a member of Concordia’s National Honor Society. She has spoken and sang at chapel in front of 600 peers and faculty as well as spoken at FCA’s Fields of Faith event. Good was also honored as the Freshman Crusader Award recipient as well as the Sophomore Crusader Award recipient in 2019 and 2020; the Crusader Awards are voted upon by faculty and staff and is the highest award in the student body.

Kylie’s confidence was shaken but she has grown leaps and bounds over the last four years. She has become an inspiration and role model for younger students. Physically she was not able to play the sport she had played her whole life. She lost her hair and wore a wig in middle school. She had to try new things and meet new people.

We are extremely proud of who Kylie Good is and how God is using her through our community, her church, and her friends and family. One of the things that Kylie has shared through her time at Concordia, is that she never wanted cancer to define her. However, through cancer, God has allowed her to experience new things, grow in ways she never anticipated, and reach the lives of so many others.

Read the full article featuring Kylie’s Make-A-Wish experience below or view it in the digital magazine here:
http://reader.prluxurymedia.com/PR%20MARKETING%20LLC/issues/207627/viewer?page=1
Specifically Pages: 9-11, 13, 15-16

While her friends were studying, shopping, and making memories during the 8th grade, Kylie Good of Tomball learned about the strength she never knew she had.

It was during her 8th grade year that Kylie experienced some trouble swallowing. She shrugged it off, thinking it was probably a case of laryngitis, until one morning on the volleyball court, she couldn’t breathe. Her throat closed up, her vision began to blur, and her head throbbed. Worried about her daughter, Kylie’s mom, Jill wasted no time and took Kylie to see an ear, nose, and throat (ENT) specialist. The ENT prescribed a steroid for Kylie, something that, in retrospect, probably saved her life.

Airing on the side of caution, the ENT ordered an ultrasound and encouraged Jill to take Kylie to MD Anderson Cancer Center. After a series of tests, it was confirmed that the fun-loving, bubbly teenager had lymphoma. Kylie was immediately admitted to the intensive care unit for two weeks, where she was put on chemotherapy and high-dose steroids.

“When I figured out that I had cancer, I was surprised. I thought only older people got cancer. I worried about dying and also was freaked out about the possibility of losing my hair,” said Kylie.

Kylie did lose her hair and, in the process, some self-confidence. She says she hated being in the hospital and just wanted to be “normal.” She also said that her classmates and friends weren’t sure how to communicate with her, which made things awkward and uncomfortable.

Instead of melting into a puddle of self-pity, though, Kylie decided to look towards the future, thanks in part to Make-A-Wish Foundation Texas Gulf Coast and Louisiana. Coming up with a wish gave her something to focus on and motivated her to fight to the finish.

And fight she did. After an extremely intense chemotherapy regime, Kylie came through with flying colors and is now in remission as she completes her senior year at Concordia Lutheran High School.

“Thinking about my wish gave me something else to focus on besides my cancer. Make-A-Wish gave me hope in the future because I knew whatever wish I decided on, it would be an amazing experience.”

At first, Kylie thought she might want a room makeover but then changed her mind and decided it would be more fun to travel. But when the COVID-19 pandemic emerged, she had to choose something different.

With the help of her mom, Kylie landed on the most appropriate wish for a senior in high school: a shopping spree, makeover, and modeling photoshoot.

When the team at Make-A-Wish Foundation learned about Kylie’s wish, they called in their reinforcements from their national partners, Macy’s. Macy’s got straight to work, ensuring Kylie had the shopping trip of her dreams.

“I thought I was just going to receive a gift card and a personal shopper,” said Kylie. “But when I arrived, there was a red carpet, a cake, makeover, stylist, and even a professional photographer. The whole experience blew me away.”

Together with the stylist, Kylie selected some new wardrobe pieces, including some boots, several pairs of jeans, a “glitzy dress,” some fun tops, and even leather shorts – some outfits Kylie would never have tried on otherwise.

She didn’t think it could get any better until she learned that Make-A-Wish would be sending her to Page Parkes for a private modeling session.

“The photo session was more than we ever imagined, and we are grateful to Page Pakres and Make-A-Wish for making it happen,” said Jill. “Kylie soaked up every minute of it and had a blast. The whole Make-A-Wish experience gave a real boost to Kylie’s self-esteem.”

Page Parkes was so impressed with Kylie that she invited her to attend the Page Parkes Teen Leadership Camp over President’s Day weekend. This camp helps young women to build their self-confidence, creating harmony between the mind, heart, and spirit – a fantastic way to start the last semester of Kylie’s senior year.

As Kylie looks beyond high school and into the future, she can’t help but think about how her cancer journey has shaped her into the person she is today and how it will impact her future.

Accepted into several colleges, including Concordia University in Austin, Mary Hardin-Baylor, and Stephen F. Austin University, Kylie is keeping her options open with sights on becoming a motivational speaker, going into counseling, or following in her mom’s footsteps and becoming a nutritionist.

When she reflects on the last few years, she says that even though the cancer journey was difficult, she wouldn’t change it for anything and has a much deeper appreciation for life. She learned a lot about herself and discovered her inner strength along the way.

“It is so important to remember that cancer and its effects don’t define you. You are so much more than your cancer and you have many gifts to give the world,” she said.

Currently, there are 36 kids in The Woodlands/Spring/Tomball area waiting for their wish to be granted. To get involved and to learn more about how to make their wishes come true, visit www.wish.org/texgulf/volunteer